Like many of our fellow Personal Trainers and Coaches, Deadlifts and RDLs are “go to” exercises for us, which we use in some form with EVERYONE we train from pro athlete to physique competitor to fitness enthusiasts.

We’ve found Romanian Deadlifts (RDLs) especially are one of most effective ways to strengthen you lower-back, glutes and hamstrings in a functional manner that has a (SAID) transfer into improving the safety and efficiency of raising and lowering your body in many activities of daily living and sports. 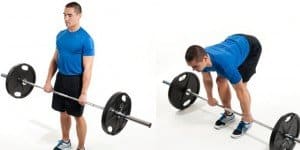 The thing is, although we always use some form of Deadlift or RDLs, we don’t always use the traditional RDLs (pictured above) depending on individual abilities and training goals.

Here’s a list highlighting 3 of our favorite Romanian Deadlift (RDL) Variations we’ve used at Performance U:

Not to be mistaken for Romanian Deadlifts, the Roman Deadlift is a cool Hybrid deadlift variation developed by John Romaniello, which we like because it allows use to perform some eccentric overload training on the posterior chain muscles.

The Keystone Deadlift is basically a partial range RDL where you only lower the bar to your knee level, which we like because it allows us to focus on building more strength and power in the (mid-range “athletic position”) we see happen most often in sports.

The limited ROM is also great for individuals who’re unable to use a full ROM RDL.

We first learned about Keystone Deadlifts back in the was in 90’s when Evander Holyfield used them as part of his Hybrid Bodybuilding program when preparing to fight Buster Douglas and then Mike Tyson.

We often hear Personal Trainers and Strength Coaches say they don’t like the Good Morning exercise for one reason or the other. The funny thing is, these same coaches use Romanian Deadlifts, which involves the exact same body action with a different bar placement!

We love RDLs, which is why we also like Good Mornings and feel they’re also great way to strengthen your lower-back, glutes and hamstrings! You just can’t go very heavy on these because the placement of the bar creates a longer lever arm, which puts you at much less mechanical advantage than pulling the bar from the floor.

Here’s how we “coach up” these bad-boys-

What are YOUR Favorite RDL Variations?