Today’s post is a reality check about the current state of (declining) child health, which everyone should know about. By, as they say, “increasing awareness” to these issues, they can be embraced and overcome, as the solution to these BIG problems is very simple and obvious.

Here are 5 very real (and very scary) facts about the (poor) health of kids today:

1. The number of overweight children in America has tripled in the last three decades. 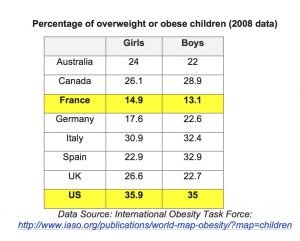 According to the Centers for Disease Control and Prevention (CDC) website:

– Childhood obesity has more than doubled in children and tripled in adolescents in the past 30 years.

– In 2010, more than one third of children and adolescents were overweight or obese.

– Obese adolescents are more likely to have prediabetes, a condition in which blood glucose levels indicate a high risk for development of diabetes.

– Children and adolescents who are obese are at greater risk for bone and joint problems, sleep apnea, and social and psychological problems such as stigmatization and poor self-esteem.

– Overweight and obesity are associated with increased risk for many types of cancer, including cancer of the breast, colon, endometrium, esophagus, kidney, pancreas, gall bladder, thyroid, ovary, cervix, and prostate, as well as multiple myeloma and Hodgkin’s lymphoma.

Note: Go here to the CDC’s website to see the scientific references for the statements made above.

2. While the children’s menus at fast-food chains are as unhealthy as adults, at the sit-down restaurant chains the kids’ offerings are worse than the adults.

According to this report published on the Center for Science in the Public Interest website:

– Children consume on average 25% of their daily calories at fast-food and other restaurants, and consumption of restaurant food is associated with increased energy intake and poorer diet quality.

– One-thrid of american children eat at fast-food restaurants everyday. These children average daily intake of 187 calories more than other children, which can result in an extra six pounds a year assuming equal exercise.

– The adult offerings at most of the largest chain restaurants in the US usually include grilled chicken entrees and sides and vegetable and salads, but the children’s menus feature mainly entrees which are automatically accompanied by french fries and a dessert.

– Of the 50 largest (by revenue in 2009) chain restaurants in the United States, 9 (18%) did not have dedicated children’s menu items or meals. Of the 41 chains with children’s items, 34 (83%) offered children’s meal combinations and provided adequate information for nutrition analyses.

3. Measurements of kids’ metabolism, including calorie burning, average 14.5% lower when watching TV than when simply lying in bed.

In this 1993 study published in Pediatrics found that “Metabolic rate during television viewing was significantly lower (mean decrease of 211 kcal extrapolated to a day) than during rest. Obese children tended to have a larger decrease, although this difference was not statistically significant (262 kcal/d vs 167 kcal/d, respectively).”

The researchers in the study concluded that “Television viewing has a fairly profound lowering effect of metabolic rate and may be a mechanism for the relationship between obesity and amount of television viewing.”

Another similar 2006 study published in Eating Behaviors found that although “no significant differences in metabolic rate between weight groups – 90 pre-pubertal girls ranging in body mass index from underweight to obese – nor between activity conditions (story listening and TV viewing) and rest conditions. A significant dose-response relationship was found in which resting energy expenditure (REE) decreased as average weekly hours of TV viewing increased, after adjusting for body mass index and puberty stage.”

4. More children prefer TV to their father, and are more likely to develop sleep and behavioral problems from watching too much television.

According to the Bureau of Labor Statistics (BLS) American Time Use Survey, A.C. Nielsen Co. “54% of 4-6 year-olds who, when asked to choose between watching TV and spending time with their fathers, preferred television.”

A 1999 article in Pediatrics reported that the longer children sit in front of a TV, the less likely they are to sleep well.

A 2011 study published in Preventative Medicine examined the relationship of TV in the bedroom (BTV) independent of total viewing time, with social and behavioral characteristics. The researchers found “BTV was associated with higher prevalence of exhibiting problematic social behaviors (29%) and overweight status (44%).”

The researchers also found that “BTV was significantly associated with lower prevalence of engagement in school (16%), participation in extracurricular activities (31%), regularly sleeping enough (20%).”

5. Out-of-shape elementary and middle-school students get worse grades than their physically fit classmates.

This report  from the NYC Health Department and Department of Education found that During the 2007-2008 school year, students who scored in the top 5% on their fitness tests — on measures that included strength and aerobic capacity — had higher math and reading scores on average than the bottom 5% by an average of 36 percentile points on standardized academic tests.

Given the statistics described above, its highly likely that most cities have similar ratios of overweight kids to NYC.

…this responsibility is (mainly) on parents. As with adults, kids can certainly have their share of junk food and spend time watching TV or on the Computer. But those things must be balanced out (or offset) by also regularly eating whole foods and being physically active. And, what the schools can do to help (the parents) is bring back PE class each day! Doing so can not only improve the physical health of kids, but also their brain power!

“There are a lot of studies that show that more time for PE and other physical activity help improve academic performance,” according to Howell Wechsler, director of the Division of Adolescent and School Health for the Centers for Disease Control and Prevention.

He and colleagues reviewed 50 studies that examined the effect of school-based physical activity on academic performance. Half of the findings showed positive associations; half showed no effect, but virtually none of the research showed any negative impact, Wechsler says.

Among the specific findings:

– “Recess can improve students’ attention and concentration and ability to stay on task.”

– “Short physical activity breaks of about 5 to 20 minutes in the classroom can improve attention span, classroom behavior and achievement tests scores.”

– “Participation in sports teams and physical activity clubs, often organized by the school and run outside of the regular day, can improve grade point average, school attachment, educational aspirations and the likelihood of graduation.”

Plus, not only can getting kids to be more physically active (in school or with their parents) improve physical health and academic performance, it can also reduce risk of developing emotional health problems.

In his 2011 article titled The Decline of Play and the Rise of Psychopathology in Children and Adolescents (published in the American Journal of Play), Peter Gray, Ph.D., Professor of Psychology at Boston College, details not only how much children’s play time has continually declined, but how this lack of play affects emotional development, leading to the rise of anxiety, depression, and problems of attention and self control.

1. Play gives children a chance to find and develop a connection to their own self-identified and self-guided interests.

2. It is through play that children first learn how to make decisions, solve problems, exert self control, and follow rules.

3. Children learn to handle their emotions, including anger and fear, during play.

4. Play helps children make friends and learn to get along with each other as equals.

5. Most importantly, play is a source of happiness.