Are You Treating Training & Nutrition Methods as Religion or Science?

First off, I want to thank everyone for taking the time to congratulate me on being named the 2016 NSCA Personal Trainer of the Year. The NSCA did an amazing job on the awards banquet at their 2016 National Convention in New Orleans. And, getting to share what is a major career highlight for me with some special fiends and family who came out for the event made it extra special and memorable night. 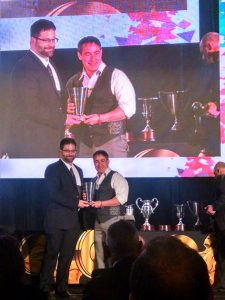 I promise to use this professional accolade as inspiration to continue to work my tail off doing what I can to give back to the field that has given me so much. To leave the fitness and conditioning field a better place than when I came into it by providing my fellow fitness professionals with the tools and resources that I wished were available to me.

Now, lets get into talking shop about my focus of this post.

Just about every fitness and conditioning professional agrees that training is an “art and a science.” Or, as I prefer to say, training is the “art of applying the science.” Unfortunately, many trainers and coaches don’t act on their own words because they often treat the beliefs that drive their training and nutritional practices more like a religion than a science. In that, instead of following the scientific evidence and consistent logic where it leads, they twist logic and lead the evidence where they want it to go.

Instead of remaining open to new quality evidence and willing to revise their beliefs when presented with new evidence that warrants it, which is the nature of scientific thinking, they refuse to accept any evidence or logical argument that contradicts the beliefs they hold no matter how good it is. This is because they have a presupposition that it’s wrong since they have required beliefs and they have prohibited beliefs in their training or nutrition dogma. And, these beliefs must be defended and adhered to, regardless of how much these beliefs contradict science or outrage reason. This is the nature of religious thinking, not scientific thinking.

Scientific thinking is not to assume the answers to questions before we even ask them, and to conform one’s beliefs to the evidence of reality. Many fitness trainers and conditioning coaches, as well as nutrition and rehabilitation professionals, do the opposite! They let their ideology determine their science because they assume the answers then asks the questions, which is the basis of religious thinking. These health, fitness and conditioning professionals begin with a belief then look to find ways to make that approach seem scientific. This is called “pseudoscience.”

Health, fitness and conditioning professionals commonly and proudly use religious thinking when it comes to their justifications for the beliefs that drive their practices. For example, many health and fitness professionals default to some version of the “trainers are ahead of research” argument and are quick to cite their “in practice” experience in an attempt to 1) discredit the science that collides with their beliefs and 2) to convince others the claims they make about their practices are valid.

As I demonstrated in my articles, Science vs. Experience: What Anecdotal Evidence Does and Doesn’t Prove and Debunking the Top 6 “Trainers Are Ahead of Research” Arguments, these arguments are just basic forms of confirmation bias. They start with a belief then work backwards to find reasons they can use to justify it. And those (highly flawed) reasons for justification are often expressed by appealing to generic arguments that they think are the knock-down argument against the entire scientific enterprise, by invoking conspiracy and by resorting to logical misapplication.

It’s Now What You Think – It’s How You Think

Many health and fitness professionals will take a scientific assessment and accept the scientific evidence as the best explaination for our understanding of health with regards to subjects like the effects of smoking. However, many of these individuals will refuse to do the same when the same scientific principles have been used to come up with answers that disagree with their preconceptions. This is cherry picking what science you do and don’t want to accept, which is intellectually dishonest.

Questioning scientific evidence is a totally legitimate thing to do. It’s a totally scientific thing to do! When it comes to the pharmaceutical industry, or the oil companies, or the banks, etc. we know that claims are only as good as the evidence that supports them. We know that if you think something is bullshit, the answer is not more bullshit like “I’ve seen it work”  or “We’re ahead of the research.” All I’m advocating is that we use the same standards of evidence and rationality that we use in most other aspects of our lives in the health and fitness profession.

As I’ve pointed out above, how you think can be a huge barrier to acquiring reliable information in your continued personal trainer education because how you think determines your “facts.” Trainers and coaches often hold beliefs about their practices that make them sound and look more impressive to their clients. Cognitive biases are hard to avoid, but remaining humble about the things you believe (and why you believe them) goes a long way.

Put simply, bias in science is bad science, but bias in religion is dogma. You don’t have to be a scientist to do things in the sprit of science.

Since training is the art of applying the science, and teaching other people in exchange for their hand-earned money and valuable time should be one’s vehicle for becoming more responsible, improving the health and fitness profession involves treating one’s beliefs and practices as a science by honoring scientific values:

– A demand for good evidence,

– A respect for logical consistency and

– A commitment to intellectual honesty.

The rational mind ensures that the confidence level of a belief is proportional to the evidence. It’s the ability to reason through problems, to evaluate evidence, to generate counterexamples, to clearly state why we believe or don’t believe, to revise our beliefs, to use the results to inform our decisions that helps us to form better professional communities. And, improving these abilities are precisely what honoring scientific values through utilizing scientific thinking processes is a vehicle for accomplishing.

Honoring scientific values isn’t disrespectful to any professional in our field, but failing to honor them in forming the beliefs we use to inform our practices is incredibly disrespectful to our paying clients.

Related Content – Science vs. Coaches vs. Athletes: Who Should You Listen To?

Teaching at the Elite Fitness and Performance Summit on August 5-6th in Louisville, KY.

Teaching at the NSCA Personal Trainers Conference on October 14-16th, 2016 in Jacksonville, FL.