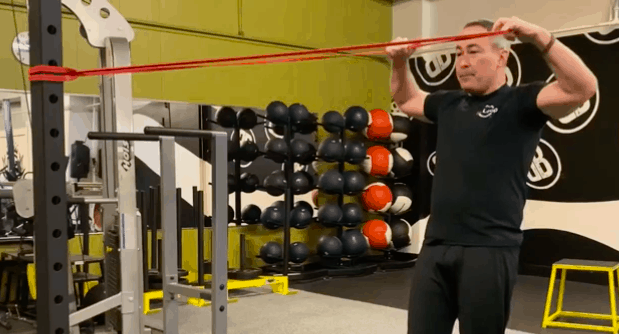 Why NOT to do Face Pulls with a Band

The popularity of the band face pull exercise is a glaring example of how education about using resistance bands properly and safely hasn’t kept up with the popularity of some band exercises. Band face pulls are a very dangerous exercise considering the massive risk of suffering a potentially blinding eye injury if the band snaps…and bands snap all the time. This is the one major issue people who use or promote band face pulls never seem to think about, but very much need to start. Band face pull proponents seem to only consider the potential training benefits the exercise has on the shoulder complex. But users must also understand the equipment being used. Put simply, bands should not be treated like cables and users must be aware of the safety that can be controlled.

Beyond exercisers and trainers promoting this exercise, it gets worse! A Google image search on the term “band face pull” results in major fitness media resources promoting the two band face pull variations I also showed in that video that are even more dangerous, especially considering the risk of major eye/face injury.

Note: To avoid any copyright issues from simply copying the images here, the above are screenshots of goole image search results for the term “band face pull” to demonstrate that both the double-band face pull and seated band face pull variations do indeed show up multiple times, and some by major media sources.

Placing one band through the other (aka. double band face pull) as demonstrated in these images is an even more dangerous version of the band face pull exercise because if the band the user is pulling against breaks, it guarantees the band being held in each hand will function as a sling-shot directly into the face and eyes with enough force to do real damage.

These seated band face pull may be the most thoughtless version of band face pull of them all. This band face pull version is asking for an accident. The band is hardly secure as it is placed under the feet in this manner, all while the band is aimed directly at the face under maximum tension.

Since it doesn’t take much for the band to roll up and off the feet, it would be smarter to at least place the feet against the wall if insisting on doing this version of the exercise. Regardless, the smartest approach is to never pull a band towards the face. The risks of suffering a potentially blinding injury are just too great.

The Most Irresponsible Exercise I Used to Teach

I’m not beyond making this same type of thoughtless mistake in an exercise I’ve used and promoted. This is a picture from this 2009 T-nation article written by yours truly.

Put simply, this is the most irresponsible exercise I’ve ever used and taught (for over a decade) because it’s so easy for the band to come free from your foot and hit you in the face with enough force to cause serious injury. Luckily, I used this exercise for years without issue, but never once thought about the massive liability risk.

Exercises like this and band face pulls are like texting while driving. In that, just because you’ve done it repeatedly without issue doesn’t mean it’s smart and safe to keep doing.

Of course, I no longer use this exercise because I’m now more aware than when using resistance bands, minimizing training-related injury risk isn’t just about good exercise technique and avoiding overdoing it; it’s also about being aware of basic safety guidelines to ensure your band workout doesn’t result in a preventable, accidental injury.

Here’s what the good folks at T-Nation recently said about the NT Loop Bands in their Stuff We Like – Equipment review:

Whether you’re training at home or adding accommodating resistance to your big lifts at the gym, bands are a must-have accessory. Problem is, most latex bands have limited uses and they uncomfortably dig into your body. Standard bands can even wear out, lose elasticity, break, and snap the ever-lovin’ shit out of you.

But not these bands. Designed by T Nation contributor Nick Tumminello, NT Loops are made of a practically bulletproof fabric. They’re 3 inches wide so they won’t pinch, cut into your body, or move around during training.

At 50 inches, these are the most versatile bands on the market. Throw this two-loop set into your Amazon cart and you’ll be throwing them into your gym bag forever.”