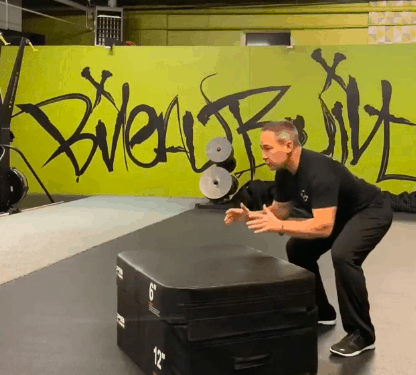 I’ve developed and use the following 6-phase box jump and landing exercise progression.

That said, for coaching all exercises, I use the same process popularized by American football coaches: Stance – Alignment – Assignment.

The stance for both the following squat jump and double-leg landing progressions is the same – a squat stance with the thighs and torso roughly 45-degrees relative to the floor and the feet just outside shoulder-width. In other words, the take-off should look just like the landing and vice versa.

The alignment involves keeping the knees tracking in-line with the feet and with a fairly neutral spine. The prerequisite to both of the following progressions is the ability to demonstrate this stance and alignment.

Once the above two phases are completed (and performed in conjunction), and competency in stance and alignment is displayed in Phase 2a and 2b, progress to the following phases.

Doing the drop-jump backwards off the box forces you to feel the ground and reflexively decelerate when your feet make contact. Whereas, dropping from the back of the box as in Phases 1 and 2, you see the ground coming and simply use your eyes. The athletic challenge is furthered in phase 6 by requiring a fast transition from landing to jumping. This makes it more plyometric.

Many people get hurt because they perform drills and sporting actions their body isn’t ready for. Spend two to four weeks (on average) in each phase to ensure your body is prepared for the demands of the next phase and other advanced jumping and landing drills.

High box jumps get misused when the emphasis is on the height of the box instead of the height of actual jump. Sounds weird, but here’s why that is:

Let’s say you’re standing next to a high box platform that’s the same height as your waist. Now pick up one leg off the ground and flex your hip as high as you possibly can. The distance between the bottom of your foot and the top of the box is the actual height you’d have to jump in order to get on top of that box. The rest comes from hip flexion.

Trying to increase vertical jump height? That will require a powerful and explosive hip extension action, instead of a hip flexion action, which means you actually want to limit the amount of hip flexion involved in landing on top of the box.

If you do this, you won’t land on top of the box in that super-low crouched position we see during high box jumps. Instead, you want to find the highest box height that you’re able to land on, but with your knees and hips only bent around 30 degrees. With this method you’ll get all the good stuff from the exercise and you’ll be far less likely to become the star of the next high-box fail video.

Of course, you won’t be able to use as high of a box if you’re limiting the amount of hip flexion involved in the movement, which may be a blow to your ego. But there’s a big difference between what determines smart and effective training and what makes for cool social media material.

Plyometrics can best be described as “reactive power” training, as plyometrics involve powerful contractions in response to a rapid stretching (eccentric action) of the same muscle and connective tissue.

But let’s make it really simple. A good example of plyometrics in action is the fact that you can jump higher when you take a few steps before a jump.

The more powerful the reflex and subsequent contraction – via the steps before the jump – the more elastic energy is stored in the muscle.

Likewise, the shorter the amortization phase, the more powerful the subsequent muscle contraction will be.

So the ultimate goal of plyometrics is to take advantage of the elastic component of your muscle-tendon unit and utilize the stretch reflex (an involuntary neural event) to achieve as strong a muscle contraction as possible in the shortest amount of time possible.

Put simply, a standing broad jump or jump onto a high box are power exercises; they are not very plyometric exercises.

So, the plyometric version of a box jump would be to either first jump off of a small box or take a small jump into the air and then, upon landing, minimize your ground contact time and immediately explode onto the high box. Hence what we do in phases 5 and 6 of my 6-phase box jump and landing progress

In short, the less ground contact time you have between jumps, the greater the stretch reflex you create, therefore the greater plyometric effect.

Calling anything that involves jumping “plyometrics” is inaccurate. In that, using jumps as power training is purely about improving muscular power, and is based on the height or length of the jump. However, plyometric jumps are about improving the elasticity of your muscle-tendon unit and about refining the stretch reflex.