Burpees Aren’t a Bad Exercise! The Practical & Scientific Reasons Why

Many personal trainers and strength coaches argue that the Burpees exercise is bad or inherently dangerous. I’m not one of them.

In this post I’m sharing how I perform the burpee exercise differently than it’s traditionally done, and also explain my rationale for doing so while addressing some of the common concerns I’ve heard about the burpees exercise from other trainers and coaches.

Plus, below the video I provide some cool research findings on the burpees exercises, and also show why the debates trainers and coaches get into about things like burpees aren’t nearly as trivial as they may seem. This is because these debates aren’t actually about the burpee exercise, but about something much deeper and more important.

Burpees Exercise: A Better Way to Do Them, Why They’re Not Bad

Watch this video below to:

How to Do Gorilla Buprees

As you see in the video above, I don’t perform the Burpees exercise in the traditional manner. Instead I do what I call Gorilla Buprees, which are an exercise I’ve included in all three of my books: Building Muscle and Performance, Strength Training for Fat Loss and (my newest book) Your Workout PERFECTED.

To give you more detail on how and why to perform the Gorilla Burpees exercise, here’s the section on them from my book, Your Workout PERFECTED: 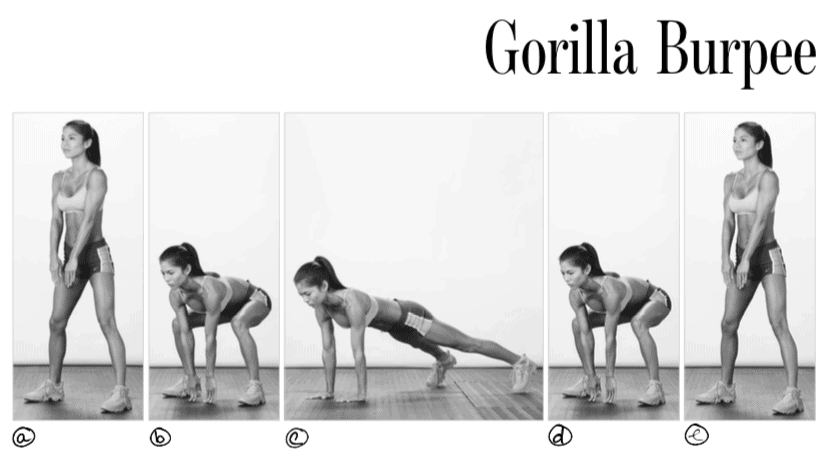 With your feet slightly farther than shoulder-width apart, hold your arms straight in front of your body (see figure a).

Bend your knees and hinge forward at your hips so that your torso leans forward. Place your hands on the ground, with your wrists directly below your shoulders (see figure b), and jump backward to move into a push-up position (see figure c). Make sure that your body forms a straight line and that you do not allow your hips to sag toward the floor in the push-up position. Jump back up so your feet are outside your hands (see figure d), then return to a tall standing position to complete the rep (see figure e).

You start with your feet slightly farther than shoulder-width apart, instead of the way the burpee is commonly done, which has them closer together. Then, in this version, you’re lowering and raising your torso by mainly bending and extending from your knees and your hips, which places more emphasis on the lower body. Burpees are commonly performed by bending over mostly from your lower back and placing your hands on the floor in front of your feet, involving less contribution from the lower body and placing more stress on the lower back.

Science on the Burpees Exercise

A 2014 study published in the Journal of Strength & Conditioning Research did a comparison of responses to sprint interval cycling and the burpees exercise. The study was done on U.S. Army Reserve members who had at least 1 year of preplanned, supervised exercise a minimum of 3 days per week for a duration of approximately 1 hour per before the start of the study,

The sprint interval cycling group did “all-out” bursts against resistance for 30 seconds. And, during the 4-minute active recovery period after each sprint, participants cycled against no resistance. The burpee exercise group performed as many burpees as possible for 30 seconds, followed by 4 minutes of active recovery involving stepping in place at a self-selected pace. Both groups repeated this cycle 3 times for a total of 4 sets.

The results of this study suggest that “the cardiovascular strain elicited by a single session of low-volume, high-intensity intermittent burpees may be sufficient to confer cardiorespiratory and metabolic adaptations equivalent to those reported in studies using sprint interval cycling.“ (1)

Another important finding of this study was that participant perceptions of exertion were significantly different. Although the self reports ranged from “hard” to “very hard,” and the reported rating of perceived exertion during both sessions characterizes the exercise intensity as vigorous; the subjects perceived the burpees exercise to be easier. (1)

The researchers stated that this may be because sprint-interval cycling primarily involves the leg flexor and extensor muscles, whereas a greater amount of whole-body musculature is active in performing the burpees exercise. (1)

The researchers went on to state that these findings should be of specific interest to strength and conditioning professionals who want to provide athletes and other clients with a vigorous whole-body aerobic and anaerobic conditioning alternative to traditionally programmed running, cycling, or swimming. Unlike sprint interval cycling that requires specialized equipment or a running protocol that requires access to at least a minimum amount of terrain or to a treadmill, the burpees exercise is cost-free, accessible to all, and may be completed in small space. (1)

In short, this research demonstrates that not only are burpees an effective metabolic exercise that requires no special equipment and very little space to perform; it also may be a more tolerable conditioning option (which can increase adherence) based on perception of fatigue over other traditional conditioning options such a bike sprints.

What Exercise Debates Are Really About

Put simply, it’s a myth that the debates about the efficacy of exercises like crunches, hip thrusts and burpees are actually about the particular exercise in question.

Many trainers and coaches will say it’s very important that one be able to justify what they’re doing in their training. This is because they know that what separates good trainers and coaches from those who don’t know any better goes beyond the use of any particular exercise. It’s about how well one can justify the use of a given exercise in they way they’re utilizing it. Therefore, they feel it’s very worthwhile to discuss the reasons why one is using a particular exercise in the way they are because, if one is presenting bad reasons as justification for what they’re doing, those reasons can be discussed and modified for the better.

Well, that’s exactly what’s going on with debates about crunches, hip thrusts, and burpees. It’s far less about the use of the exercise in question, and far more about how good or bad the justifications are that people are providing for the claims they’ve made about a given exercise. Yet, many of the same trainers and coaches who proudly say how important it is that one be able to properly justify what they’re saying and doing in their programming, will turn around and label such debates as being about nothing more than a trivial exercise. And, therefore they’re quick to write off such debates as being petty and unimportant. That’s the very definition of a logical contradiction.

In short, these debates are not about what you think about a give exercise such as burpees, but rather about how you think in general. More specifically, the reliability and validity of how you think. And, how you think is crucial because if someone is presenting poorly reasoned, logically flawed arguments in attempt to support their own positions on something like burpees, it reveals a deeper reality about the (sloppy) thinking processes they use that drive their training decisions. It also shows they’re less able to identify poorly reasoned arguments and unjustified claims when they’re made by others who struggle with critical thinking.

You see, it’s not simply whether someone can explain their perspectives that drive their decisions on exercise programming; it’s whether or not the explanations they’re providing are valid and reliable. We tend to want to focus on the conclusions people hold about a given topic when we should be focusing on the thinking processes they used to reach the conclusion they’ve come to. This is because claims and beliefs are only as good as the evidence and rationale that’s given to support them. Hence, why not all (conflicting) information/opinions are equally valid.

This comes down to being able to better evaluate and discern information, which is exactly what I discuss in my B.S. Detection For Personal Trainers lecture, which you watch in its entirity HERE.