Do Certain Types of Workouts Create Winners (like Conor McGregor)?

After a sports team wins a championship or a fighter (like Conor McGregor) has a lot of success, everyone wants to know what exercises/workouts these successfull athletes are doing. This idea is so the rest of us can replicate it hoping some of their mojo will eventually rub off on us. The question is: It is realistic to credit any particular workout program, much less any specific type of exercise(s), for the success an athlete achieves?

What Movement Training and Strength & Conditioning Can and Can’t Do

Put simply, a good movement training and strength and conditioning program helps to give you the functional capacity and physical fitness to do what you already know how to do (i.e., express the skills and instincts you posses when practicing and competing in your given sport).

Sure, a good football player or fighter who is mobile, strong and fast is better than a good football player or fighter who is less mobile, slow and relatively weak. But improving one’s functional capacity and physical fitness doesn’t make you a winner if you lack the skills required to play your sport. In that, running faster doesn’t help if you’re running to the wrong spot on the field, and strength doesn’t help if you miss a block or push your opponent in the wrong direction.

In other words, all field, court, and combat athletes reach the highest levels because they’re the best at playing their sport – not because of any particular (special) workout methods they use or how good they are at performing any type of exercises.

All you need to do is look at the NFL combine results for proof:

As I said in my Truth About the Bench Press article:

“All these athletes had “raw” physical ability, but what separated the zeros from the NFL heroes was their ability to use that talent as a platform to express their will and skill to actually play the game. In other words, physical ability is meaningless if you stink at your sport! And physical training will just make you a bigger, stronger, faster dude who still happens to stink at his sport. It’s your skill and your will that makes you a winner.”

Additionally, there are far more similarities than differences in the exercise programs athletes in the same sports are using. So, you have the reality that other athletes are doing the very same types of training methods and not having the same success. A great example is Conor McGregor’s teammate, Gunnar Nelson – I had the honor of spending an hour working with Gunnar when I was speaking in Iceland in 2011 – used the same exercises as Conor, but got completely dominated on the same night of Connor’s UFC 194 victory. 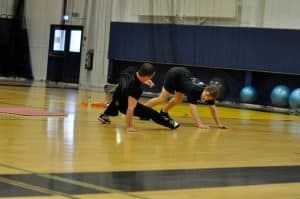 So, if lots of athletes are doing the same types of exercises, and bound by the same principles of the human body and physics, etc. but seeing different results in their level of success, what’s the difference? It’s the skills and instincts each individual posses.

I certainly think that certain training approaches for athletes make more sense than others. And, I think it’s great to look at what successful athletes are doing in order to get inspiration and learn some new training ideas, but it’s a mistake to look at what they’re doing as if it’s the “secret sauce” behind their success.

It’s for the reasons above that I feel strongly that it’s completely unrealistic (and unreasonable) to credit any particular workout program, much less any specific exercises, for the success an athlete achieves. Not to mention, we’ve seen this pattern before each time different athletes are in the limelight currently have success: The new best thing is better than last best thing.

A good movement training and strength and conditioning program helps you improve physical qualities that are not addressed by simply playing and practicing your sport, but it can only give you the physical fitness and functional capacity to do what you already know how to do when you practice and compete. That said, if there’s any credit to be given to a movement training and strength & conditioning program for an athlete’s success, it’s for 1) simply helping the athlete to get more gas in the tank (the conditioning) to express their skill and their will throughout the competition, and 2) for not hurting the athlete during the training process.

Note: Keep in my this post is coming from a person (me) who makes a living as someone who provides movement training and strength & conditioning programs. This post isn’t intended to undermine any particular athlete, coach or training approach. It’s simply to provide a reasonable and realistic perspective on performance training programs.