In this article we’re going to quickly explore what the research tells us on exercise, nutrition and supplementation for building and maintaining healthy and strong bones.

There is a substantial body of evidence indicating that bone mass can be increased by some exercise programs in adults and the elderly, and attenuate the losses in bone mass associated with aging (1). However, not all exercise modalities have been shown to create positive effects on bone mass. For example, unloaded exercise such as swimming has not shown to have an impact on bone mass, while walking or running has limited positive effects. Not to mention, cycling has been associated with decreases in bone mineral density (BMD) and bone mineral content (BMC) of the thigh, hip and lumbar spine in both female and male cyclists (2).

The scientific evidence points to a combination of high-impact (i.e. jumping) and resistance training exercises. Exercise involving high impacts, even a relatively small amount, appears to be the most efficient for enhancing bone mass. That said, since medical or injury limitations may prevent someone from doing high impact exercises, regularly using strength training on it’s own is also a very effective means of improving and maintaining bone strength and health.

In addition to promoting muscle strength and mass, resistance training also effectively increases bone mass (i.e., bone mineral density and content) and bone strength, and may reduce the chance of developing musculoskeletal disorder (e.g., conditions of the bones, muscles, joints and ligaments) such as osteoporosis. (3,4)

Additionally, resistance training may help to slow down or even reverse the loss of bone mass in people with osteoporosis. (5)

It’s important for women to note that, when it comes to maximizing both the health and physique improvement benefits of resistance training, those tiny pink dumbbells just aren’t the tool for the job. Instead, women benefit from the type of heavy lifting that they’re more accustomed to seeing men do – doing some sets in the 3-8 rep range while using a weight load that challenges you within that rep range. Doing this is how you put the strength in “strength training.”

In other words, the principle of specificity – a universal training principle – dictates that the adaptations to training will be specific to the demands the training puts on the body. So, the way you build stronger bones is by constantly challenging your body to become stronger by gradually using progressively heavier loads.

Adequate nutrition plays an important role in the development and maintenance of bone structures resistant to usual mechanical stresses of daily life and physical activity. And, dietary proteins represent key nutrients for bone health and thereby function in the prevention of osteoporosis, as a multitude of studies point to a positive effect of high protein intake on bone mineral density or content (6).

Of course, now the question arises: Is a high-protein diet harmful to your bones?

Put simply, there is no good scientific evidence that a high protein intake per se would be detrimental for bone mass and strength in otherwise healthy individuals. Not only is it based on a myth, it’s a completely backwards myth, as not enough protein has been repeatedly shown in the research to be deleterious to your bone health.

For example, a 2002 study published in Food and Chemical Toxicology concluded that “excess protein will not harm the skeleton if the calcium intake is adequate,” while a review study published in 2003 in The Journal of Nutrition showed that people with chronically low protein consumption were at higher risk for lower bone density and more bone loss (7,8).

Additionally, a 1998 study published in Nutrition Reviews worth noting found that protein supplements help elderly folks heal faster from bone-related injuries. They looked specifically at femoral fractures—the large leg bone that connects with the pelvis to create the hip joint—and found that supplementing with 20 grams of protein a day reduced bone loss and allowed seniors to return home sooner from rehabilitation facilities. (9)

As you can see, contrary to popular misconception based on cherry picked data and irresponsible media practices, the real danger to your health comes from a low-protein diet. It’s bad for your body composition, bone density, and metabolism.

To learn more about all-things protein, check out the (Open Access) Protein Report Lou Schuler and I wrote. 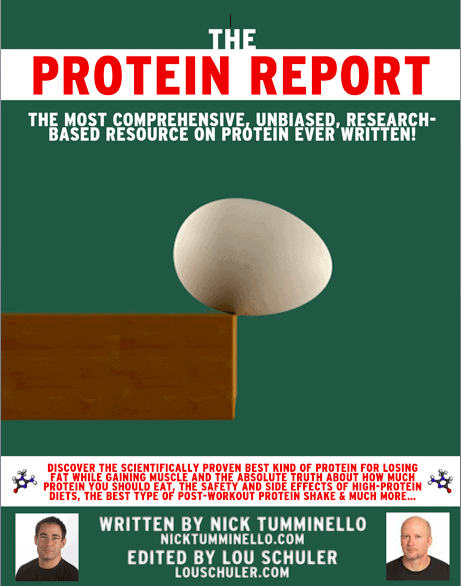 Some evidence shows that calcium supplementation may be beneficial in populations susceptible to osteoporosis (10). And, some evidence shows that co-supplementation of vitamin D with calcium may help prevent bone loss in athletes susceptible to osteoporosis (11). However, a 2014 a systematic review of the scientific literature titled, Vitamin D and Calcium: A Systematic Review of Health Outcomes (Update), summarized the body of evidence on the relationship between vitamin D alone or in combination with calcium on selected health outcomes included in their earlier review: primarily those related to bone health, cardiovascular health, or cancer outcomes.

In solid agreement with the findings of their original 2009 report, the majority of the findings concerning vitamin D, alone or in combination with calcium, on the health outcomes of interest were inconsistent. (12)

The authors of this paper concluded that, “It is difficult to make any substantive statements on the basis of the available evidence concerning vitamin D supplementation, calcium intake, or the combination of both nutrients, with the various health outcomes because most of the findings were inconsistent.”

The focus of this article is on scientifically founded strategies for improving and maintaining healthy and strong bones. That said, most of the best tips for improving both your health and physical appearance are the ones that are too simple to be sexy! Regularly participate in a progressive resistance-training program that fits your current ability. Eat veggies, drink plenty of water, get lots of protein, eat most whole foods, minimize refined foods and limit alcohol. And, don’t overeat.

It doesn’t matter how much science comes out, the above will always be legitimate.

Teaching at the ISSN 13th Annual Conference and Expo on June 9-11, 2016 in Clearwater Beach FL.

Serving as an expert panelist at the Personal Trainer’s Specialist Interest Group session on July 7th at the 2016 NSCA National Conference on Jul 6-9, 2016 in New Orleans, LA.

Teaching at the Elite Fitness and Performance Summit on August 5-6th in Louisville, KY.

Teaching at the NSCA Personal Trainers Conference on October 14-16, 2016 in Jacksonville, FL.