Is Aspartame Bad or Safe for You? – Get the interesting answers from the SkepDoc. And, some philosophy on being a Skeptic!

One of my absolute favorite publications to read is Skeptic.com and Skeptic magazine, which is published by The Skeptics Society.

” THE SKEPTICS SOCIETY is a scientific and educational organization of scholars, scientists, historians, magicians, professors and teachers, and anyone curious about controversial ideas, extraordinary claims, revolutionary ideas, and the promotion of science. Our mission is to serve as an educational tool for those seeking clarification and viewpoints on those controversial ideas and claims.” (taken from Skeptic.com)

In the current issue of Skeptic magazine (Vol. 16 No.3 2011 – cover pictured below), I read a very interesting article (on pg.4-5) called “Aspartame: Safe Sweetener or Perilous Poison?” by Harriet Hall M.D. (aka- The SkepDoc). 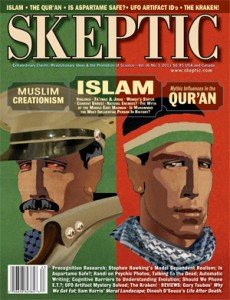 As some one who drinks an occasion diet soda and enjoys a sugar free Red Bull a few times per week, I’m always interested to learn more about aspartame. The SkepDoc’s article covered some scientific concepts and used science to clarify some controversial issues in regards to Aspartame, which I’ve shared with you below.

Before I get into the take away bullet points from the  SkepDoc’s Aspartame article, I’d like to tell you briefly about why I read publications like Skeptic magazine and why I take a skeptical approach to most of the health & fitness information that comes my way.

Note: If you’re not interested in reading about my philosophy on being a skeptic, scroll down to the title “Is Aspartame Dangerous?”

Before I’m a teacher, I’m a student!

When it comes to learning, especially when learning about health & fitness, I question EVERYTHING and EVERYONE, regardless of  the letters behind their name or the professional or social position they hold because there’s so much grey area when it comes to understanding the human body and how it works.

My approach to dealing with health & fitness related information has got me where I am today because it keeps me constantly curious. And, that curiosity is what keeps me growing and moving forward , which has helped me consistently find the smarter and more effective methods of training that I’m always sharing here at NickTumminello.com.

Due to my approach, I’ve been called a “contrarian.” I think many people confuse a “Contrarian / cynic” with a “skeptic”. Here’s some clarity on that:

“Some people believe that skepticism is the rejection of new ideas, or worse, they confuse “skeptic” with “cynic” and think that skeptics are a bunch of grumpy curmudgeons unwilling to accept any claim that challenges the status quo. This is wrong. Skepticism is a provisional approach to claims. It is the application of reason to any and all ideas — no sacred cows allowed. In other words, skepticism is a method, not a position. Ideally, skeptics do not go into an investigation closed to the possibility that a phenomenon might be real or that a claim might be true. When we say we are “skeptical,” we mean that we must see compelling evidence before we believe.” (taken from Skeptic.com)

To me, to be skeptical is to simply think for yourself!  “As René Descartes concluded that he knew one thing for certain: Cogito ergo sum — I think therefore I am.” – “In other words, to be human is to think!”

All I, or anyone else for that matter, can do with my Blogs, Articles and live workshops is share concepts and techniques that have worked for me, with various populations from seniors to elite professional MMA fighters and NFL players. It’s up to YOU to think about how YOU can or cannot apply the training techniques and concepts I always provide to successfully help YOUR clients, in YOUR setting with YOUR training style! As bruce Lee said “Absorb what is useful, Discard what is not, Add what is uniquely your own.”

Now that I’ve hit you with some philosophy, lets talk about that Aspartame article 🙂

Here are, what I feel to be, the major take home bullet points from the SkepDoc’s (Harriet Hall M.D) article called “Aspartame: Safe Sweetener or Perilous Poison?”, (on pg.4-5) of Skeptic magazine (Vol. 16 No.3 2011)

– “Aspartame is a low calorie sugar substitute  marketed under brand names such as Equal and Nutrasweet. it’s a combination of two amino acids: L-aspartic acid and L-phenylalanine.  It’s available as individual packets for adding to foods and it’s a components to many diet soft drinks and other reduced-calorie foods. Depending who you listen to, it’s either a safe aid to weight loss and diabetes control or it is evil incarnate , a deadly poison that is devastating the health of consumers.”

The Claimed Side Effects & Dangers of Aspartame

– “Many individuals recommend using stevia instead of aspartame, and usually make startling claims like these about aspartame:

1. It’s derived from from the excrement of genetically modified E. coli  bacteria.”

2. “Upon ingestion, it breaks down into aspartic acid, phenylalanine, methanol, formaldehyde, and formic acid.”

Looking at the Above Claims One by One

1.  “Many aspartame manufactures take advantage of modern genetic laboratory processes. A plasmid introduces genes into E. coli bacteria: the genes are incorporated into the bacterial DNA and they increase production of enzymes that enhance the production of phenylalanine.  The bacteria produces more phenylalanine, serving as little living factories. The phenylalanine these little workhorses produce is exactly the same as phenylalanine from any other source.  It’s disingenuous  and inflammatory  to characterize it as “derived from excrement.”

– Genetic processes like this are widely used today. One stunning example of this is Humulin. Diabetics used to develop allergic reactions to the beef and pork antigens in insulin derived from cows and pigs because it was slightly different from human insulin and contained impurities . Scientists found a way to put human insulin genes into E. coli bacteria and put them to work producing  true, pure human insulin. This was such a great advantage  for diabetics that animal insulins are no longer even available.”

2. “Some of the things we ingest are directly absorbed and utilized unchanged, like water. But, most of what we ingest is metabolized. Aspartame is metabolized. It does indeed break down into aspartic acid, phenylalanine, and methanol.”

– “Aspartic acid and phenylalanine are amino acids that we need to survive.”

– “Methanol is produced in small amounts by the metabolism of many foods: it’s harmless in small amounts. A cup of tomato juice produces six times as much methanol as a cup diet soda.”

– “Human studies show that formic acid is eliminated faster than it is formed after ingestion of aspartic acid. So yes, those compounds do appear, but so what? We get much larger amounts of the same compounds from our foods, and they don’t hurt us.”

3. “FD&C dyes (not aspartame) are the food additives most frequently associated with adverse reactions.”

– “People can report any symptom they notice after using aspartame. But, just because a symptom occurred after ingesting aspartame doesn’t prove aspartame caused the symptom. Many studies have been done and have not shown a correlation of aspartame use with any of those symptoms.”

– “We are told that is you suffer from anything from cramps to anxiety that you probably have “Aspartame disease”. We are expected to believe the unsubstantiated claim that ” when they remove brain tumors, they have found high levels of aspartame in them.”

– “All of this misinformation has been identified by various sources including Time.com, Snopes.com and About.com as a hoax or urban legend.”

– “Aspartame has been found to be safe for human consumption by the regulatory agencies of more than 90 countries worldwide, with FDA officials describing aspartame as “one of the most thoroughly tested and studied food additives the agency has ever approved” and it’s safety as “clear cut.”

– “Numerous studies have ruled out any association with headaches, seizures, behavior, cognition, mood, allergic reactions, and other conditions. It has been evaluated far more extensively than any other food additive.”

– “When new studies from the Mazzini Foundation in Italy appeared to show an association with tumors, the European Food Safety Authority examined Ramazzini’s raw data and found errors that led them to discredit the studies.”

– “Studies show that the actual consumption of aspartame is well below the limit established ADI (Accepted Daily Intake) of Aspartame of 40 mg/kg/day.”

Is Stevia Safer than Aspartame?

– “Stevia comes from a plant, and the Guarani Indians of South America have been using it to sweeten their yerba mate for centuries. The ” natural fallacy” and  the “ancient wisdom fallacy” sway many consumers. But, what does the science tell us?”

– “Is stevia preferable to aspartame? We really don’t know. Stevia is banned in most European countries and in Singapore and Hong Kong because their regulatory agencies felt that was insufficient  toxicological evidence  to demonstrate it’s safety.”

– “Stevia is a product of major corporations (Coca Cole sells Truvia and Pepsi sells it as PureVia), which is refined using ethanol, methanol, crystallization and separation technologies to separate the various glycoside molecules. It’s prepared in a laboratory using toxic chemicals like methanol. For some reason that doesn’t bother those  who are supporting stevia as a natural product.”

When it comes to developing the latest and greatest exercise techniques and concept, I consider myself to be a leader in the world of strength & conditioning.But, when it comes to nutritional related topics such as this, I’m certainly not an expert. Because I’m not an expert, I learn what I can from whom ever I can and rely on my own intuition as to what and who to believe in regards to controversial topics such as this. That said, I’m much more confident with putting my faith in research based articles and information based on scientific study, like the article above, than I am with one’s based unsupported claims.

So, for now, I’ll continue to drink my Sugar Free Red Bull and have an occasional diet soda when I don’t feel like drinking my usual water or iced tea. How about you?