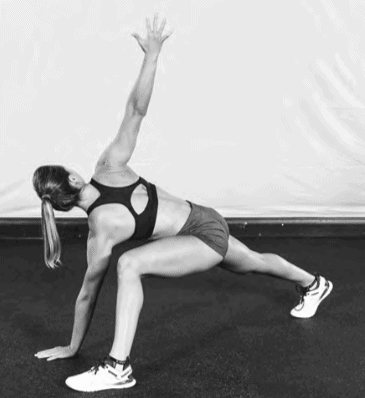 One of the most popular mobility exercises I’ve used for years as a staple in my programming is what I call the Yoga-Plex.

That said, not everyone is currently ready or capable of performing the full Yoga-plex in it’s standard or advanced form. So, in this post I’m sharing the beginner modifications I use on the Yoga-plex along with providing the exact progression sequence I use with beginner clients. Plus, I’ll show you the advanced versions of the Yoga-plex I use.

Before I get into the modifications and teaching progression I use to build clients up to performing the Yoga-Plex; here’s what the full Yoga-Plex looks like so you know what we’re discussing variations of.

I now call the above version the Linear Yoga-Plex because I also developed and use this advanced version, which I call the Lateral Yoga-Plex.

Also for more advanced individuals, I use this Combined Yoga-Plex because, as the name implies, it combines elements of both the lateral and linear Yoga-plex.

Now that we’ve reviewed the full and advanced versions of the Yoga-Plex, I’m now going to take you through the four-step teaching progressions I generally take clients through when first teaching them how to perform the Yoga-plex.

In the first phase of my teaching progression, I start them with what I call the Yoga-Stretch.

When doing the Yoga-Stretch, I coach to focus on getting their chest up and hips down (not back knee down) so as to keep a fairly straight line from their torso to their back leg on each step-up.

Once I see they’re able to perform each rep of the Yoga-Stretch in the way I just described, I then add a rotational arm reach to the same-side as the stepping leg.

What I coach here is to maintain your hips down and chest up (aka. fairly straight line from your torso to your back leg) while rotating your torso towards the sky and reaching your arm up as far as they can without forcing anything.

After seeing they’re able to perform each rep of the Yoga-Stretch with the same-side arm rotational reach in the way I just described, I then add a rotational arm reach to the opposite-side as the stepping leg.

Rotating away from your stepping leg is more difficult because you’re more limited in how far your can rotate your torso without rotating your back leg. So, again, I want to see them be able to 1) perform the opposite side arm rotational reach while maintaining the yoga-stretch position discussed above and 2) doing so without forcing anything or being tense.

Now that I’ve seen they’re able to perform all of the steps detailed above, I simply put all of the previous three steps together into the same sequence by having them do a rotational reach to both sides after each step.

On each step, I don’t require they first reach to one side before the other. I just ask them to perform a rotational arm reach to both sides in whatever order they’d like after each step while following all of the cues described thus far.

Some folks aren’t built to perform the Yoga-Plex or Yoga-Stretch without their hands elevated. In their case, we stick with the above hands-elevated variations and simply mix up the versions of rotational arm reaches (same-side, opposite-side or both) I give them in each session that I have them perform the Yoga-Stretch. In that, the downward dog portion of the linear and lateral Yoga-Plex aren’t very conducive to having your hands elevated because you tend to push whatever your hands are elevated on top of forwards when you shift your hips backwards. Not to mention, the linear Yoga-Plex requires you to step your foot where your hand was, which can’t happen with a platform or dumbbell there to elevate your hands.

For those who are able to do the above exercises with their hands on the floor, I then have them do the Linear Yoga-Plex. After I see they’ve got that on lock-down, after however many sessions it takes, I then show them the Lateral Yoga-Plex. From there I show them the Combined Yoga-Plex. And, moving beyond that, we simply mix up which version of the Yoga-plex I give them in workouts: The Linear, Lateral, Combined, or what I call the Segemented Yoga-Plex, which you can see HERE on my Instagram.

If someone picks up each version of the yoga-stretch teaching progression right away, I’ll progress them to the next phase every 2-4 sessions. So, they’ll move through the sequence pretty quickly. And, in the case of quick studies, I’ll have them perform one set as part of a warm-up for 4-6 reps per side.

For beginner clients who need some more practice and coaching, I’ll have them perform whatever phase version they’re currently on as “active recovery” between strength exercises for 2-3 sets of 5-8 reps per side. We’ll stick on a phase for as long as it takes until they’ve got looking nailed.

For advanced individuals who can do all of the versions of the Yoga-Plex; when I have them do the Yoga-Plex in a given workout, it’ll be for one set as part of a warm-up for 3-5 reps per side.

Speaking of programming, here’s my shameless plug for you to check out Practical Program Design Mastery, my new monthly programming resource that provides you personal training program for real client scenarios.

In Mexico City, Mexico on June 28-30, 2019 teaching at the One Fitness Weekend congress.

In Portland, OR on August 16-17, 2019 teaching at the NSCA Northwest Regional Conference

In Bangkok, Thailand on October 10-14, 2019 teaching at the Asia Fit Conference.