Olympic lifts are certainly a proven method of developing and improving power production. However, Olympic Lifting has never been a part of the Performance U training approach.

Put simply, we prefer other, less technical weight-training options, as we won’t ever know how much is technique in these lifts and how much is usable power that’s due to the training program.

Plus, as Richard Sorin, Iron game legend and owner of Sorinex Exercise Equipment says, “Athletes (or personal training clients) are NOT there to become weight-lifters. They are there to be athletes made stronger and rehabbed in the weight-room.”

To go along with our thought process and stance on Olympic lifting for athletes – Here’s a great article by our friend Charles Staley, author of MuscleLogic: Escalating Density Training and well-known O-Lympic lifting instructor:

Why I Changed My Relationship Status With The Olympic Lifts

Over the past several years, I’ve become known for teaching and espousing the so-called “Olympic lifts” (I.e., the two competitive events used in the sport of weightlifting, and their associated training drills). Although I’ll continue to teach, promote, and even practice the O lifts, I’ve dramatically downscaled their use in my training recently — the primary purpose of this article is to explain why, but I also hope this serves as a sounding board for your own thinking as well.

My History with Olympic Lifts

I still distinctly remember when I first became exposed to these lifts over 20 years ago — they had an enormous impact on me, as I’m sure they do with a lot of people. I immediately set out to gain as much proficiency as possible, given the limitations I had (starting over the age of 30, having poor levers, and dealing with 2 serious knee surgeries that had significantly diminished the flexion in my right knee). Eventually, in my early 40’s (yes, I’m a slow learner) I decided that I had enough proficiency to compete in the master’s division without humiliating myself. I’ve competed in Master’s Nationals 2 or 3 times, and have snatched 185, clean & jerked 231, and cleaned 255 in the gym (my clean as always been ahead of my jerk).

In 2010, I was working on my jerk technique and was talked into trying to seat the barbell higher up in my palm in the shelf position on the shoulders — ordinarily the bar tends to be more toward my fingertips in that position, which is not as optimal.

The position was “working,” and I was initially excited about it, however it soon started feeling uncomfortable in my left elbow. That discomfort quickly led to pain, which caused me to discontinue the position until further notice.

To shorten the story a bit, a few months later I noticed that both the flexion and extension in my left elbow had become reduced to the point to where my shelf position was worse than ever- in fact, I could barely rack the barbell on my shoulders at all! An orthopedic exam revealed that I had developed some calcification in the elbow. I wasn’t sure if I would ever be able to compete in weightlifting again, because even though my snatch wasn’t affected by the elbow, my clean, and especially the jerk, definitely was.

(Note: elbow surgery was a possible option, however the consensus was that I only had a 50-50 shot at any real improvement. I opted to pass, at least for the time being.) 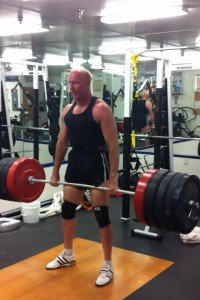 I needed something new to focus on to keep my spirits up, not to mention my fitness levels. At the urging of my friend and training partner gene Lawrence, I decided to do a powerlifting meet. For 6 months I focused on the 3 powerlifts, along with a few assistance drills such as chins and rows.

Lo and behold, lots of things started to change. For starters, and not surprisingly, my squat, bench, and deadlift all improved significantly. I had always done these lifts mind you, but only as an “afterthought” — at the end of heavy, time-consuming snatch of clean & jerk session.

More surprisingly, a chronic case of shoulder impingement all but disappeared, despite the fact that I was now bench-pressing twice a week. Benching had always caused problems for me, in any of its variations.

Finally, I was starting to notice some real changes in body composition, even though I had made no changes to my diet.

I was initially taken aback by these changes, and suddenly, I had to admit that I was enjoying my training more than I had in years. Why? I guess because I was getting something out of it!

You’re probably thinking “Well, this sounds great except that your ability to do the O lifts has obviously taken a big hit.”

Sometimes truth isn’t so obvious as it turns out: what I omitted from the story is that after my first power meet, I decided to do an O-lift workout just as a change of pace, as a way of testing my elbow, and to see how much I’d lost on these lifts. Much to my surprise, I worked up to a 180-pound power snatch, and 3 days later, I power-cleaned and jerked 225, and then power cleaned 231, but missed the jerk. Basically I hadn’t lost any ability in these lifts, despite not having done them at all in nearly 7 months. 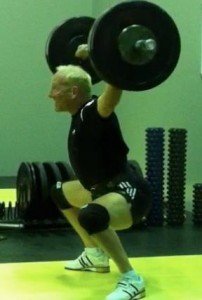 Clearly, my improved strength on the powerlifts had enough positive transfer to maintain my O-lift abilities, even without directly practicing the lifts themselves. Do I think this would happen to all or even most weightlifters? Clearly no. My technique over the years had become very stable (not perfect mind, you, but stable). I didn’t need to practice them, but I did need to get stronger. And, as my friend Eric Helms has stated, hypertrophy is always a secondary adaptation — in other words, you need to get stronger first.

So let’s step back a moment and review the lessons inherent in this story. By switching from an Olympic-lift emphasis to a powerlifting emphasis, I:

5)    Dramatically increased the number of weekly and monthly PR’s I was enjoying, which greatly enhanced my motivation to train.

Was there any down-side? Only one: the pain of self-realization. I had to accept that I had only been doing the O-lifts for two reasons — pride, and fun. Once I accepted this truth, the clouds parted and my direction in training became ever more clear.

All of the above is in no way to dismiss the potential benefit of O-lifts and their derivatives when used at the proper time, in the proper context. Unfortunately, this perspective is often clouded with bias and emotional attachment to one’s pet methods. At seminars, I often poke fun at weightlifting coaches, who love to warn their students that the Olympic lifts are highly technical, requiring years to attain proficiency, let alone mastery. Yet these same coaches will promote the O lifts as the centerpiece of strength and conditioning programs for athletes participating in sports ranging from soccer to water polo.

Methods by themselves are neither good nor bad — it is the application that determines their usefulness. Focus more on results, and release your attachments to pet theories about how things should work. Worry less about how much your athlete can power clean and more about his or her ability to deliver in the playing field. After all, when a plumber fixes a drain, does it matter what type of wrench he used? If not, why should we as strength coaches view our profession any differently? 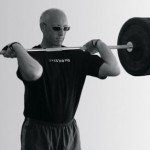 In the eyes of his colleagues, Charles is known as a visionary, an iconoclast and a rule-breaker. His clients call him “The Secret Weapon,” as he possesses the keen and perceptive ability to recognize individual strengths and shortcomings. His methods are leading-edge and ahead of their time, capable of quickly producing serious results.

Prominent both the United States and across the globe, Charles is recognized as a authoritative coach and innovator in the field of human performance. His knowledge, skills and reputation have lead to appearances on NBC’s The TODAY Show and The CBS Early Show, along with numerous radio appearances. He has penned more than a thousand articles for major publications and online websites in the industry.

Charles is not only a thinker, but also a doer: Currently, he competes at the National and World level in Weightlifting and Powerlifting on the master’s circuit. Find Charles online at www.TargetFocusFitness.com