Should Men and Women Workout Differently? 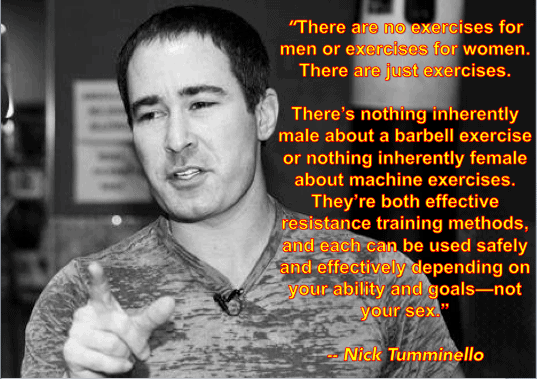 It’s common to see men stampede toward the free weights, while women pack into the Pilates and yoga studios and line up on cardio and weight machines. Should men and women train as differently as they do? There’s a lot of confusion, and here’s the truth.

Despite what it might seem, this common practice is not dishonest or misleading. After all, even the best workout won’t do anyone any good if it’s not put into practice.

The publishers of these exercise magazines are merely trying to reach their readers using the goals they commonly hear them expressing. Put another way: If exercise is medicine, then we’re much more likely to take our daily dose when it tastes good to us. If you do a quick Internet search for body-part specific exercises for the glutes, arms, chest, and shoulders, you’ll see many of those terms are commonly followed with “for women” or “for men.” This isn’t by accident. People are including those words in their Internet searches.

The truth is, there are no exercises for men or exercises for women. There are just exercises. We’re different sexes, but our bones, connective tissues, nerves, and muscles fibers are all made of the same raw material and function in the same way. There’s nothing inherently male about a barbell exercise or nothing inherently female about machine exercises. They’re both effective resistance training methods, and each can be used safely and effectively depending on your ability and goals—not your sex.

Dedicate More Training to Your Areas of Focus

The trainer in me says it’s important for all of us—men and women—to exercise all of our muscles. However, the realist in me notices that two sexes tend to focus their aesthetics-focused exercise in specific areas. Many men tend to work on their chest, arms, and shoulders, while women focus on their legs and glutes.

Put simply, muscle creates the shape of your body, and therefore you can’t build a bigger, perkier, rounder or sexier anything without building muscle. 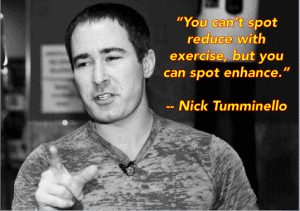 As I’ve said before, you can’t spot reduce with exercise, but you can spot enhance. Regardless of whether you’re trying to enhance your glutes, arms, chest, shoulders, etc., good exercise programming isn’t about balance; it’s about addressing individual needs and goals.

That said, research shows that there seems to be a dose response to gains in muscle size and strength (1,2). So, it’s a mistake to have a “balanced” training program that dedicates roughly the same amount of exercises, total sets and reps, and training days to your weaker, less developed areas as it does to your stronger, more well-developed muscle groups.

In other words, you excel in what you emphasize. So, although a comprehensive training program should addresses the entire body, it should also be imbalanced in a way that dedicates more overall training volume/time to the areas you’re trying to develop in most.

In Norfolk, Virginia teaching at the NSCA Tactical Strength and Conditioning (TSAC) Conference on April 2-5, 2018.