Personal trainers often ask me about how to approach strength training for runners (i.e. people who participate in running events and exercise enthusiast who enjoy running on a regular basis).

In this post I’m giving you the Reader’s Digest version of the Performance U approach to STRENGTH TRAINING FOR RUNNING.

– The running strength training workout programs we create are designed to work around the individuals running program. In that, the runner is not there to become a weightlifter, they are there to be a runner made stronger and more durable in the weight room. This is a nonnegotiable reality that many personal trainers (due to ego) fail to recognize, or simply refuse to embrace.

– The main reason we design running strength training programs around the individual’s current running schedule is to save their legs. In that, we don’t want to do anything that will fatigue their legs in a way that interferes with their running performance during sport practice, which is their running schedule. Plus, because running is so lower-body dominant, their running schedule is already beating up on the lower extremities (mainly the knee joints), so we want to spare those joints (in the strength training program), not use them in the same manner as they get used in running, and save that capacity for their actual running training.

– With the above in mind, the focus of our lower-body strength training is on the hips (i.e. the glutes) using exercises like dead lift variations (single leg in double leg), 45° hip extensions, hip thrusts, reverse hip extensions (aka. Reverse hyper’s), etc.

– The focus on the glutes is not only done to help the runner to spare (i.e. save) their knees during spring training, it’s also done to:

– In addition to an emphasis on strengthening the glutes, we’ll also emphasize hamstring focused strength training exercises (like good mornings, ball leg curls and even the lying leg curl machine), which we feel helps to balance out the quadriceps dominant loading pattern created by the action of running.

– Essentially, when it comes to strength training for running, the Performance U training approach rarely (if at all) utilizes high-load knee dominant exercises like weighted lunges, squats, step ups, leg extensions, etc. within the main body of the strength training workouts. Instead, exercises like squats and lunges are (most often) incorporated as part of a dynamic warm-up using low loads to simply maintain the movement ability. As stated above, this is done in an attempt to spare the knee joints, which are already heavily loaded during the runners’ roadwork.

– We won’t use any lower-body oriented Plyometrics with runners since they’re already getting a tremendous amount of high-impact foot contacts each time they hit the road or track.

– Since running is a unilateral oriented activity, we’ll use single leg training applications as the predominant amount of lower body exercises. If we find that one leg is significantly stronger than the other (i.e. a left/right strength asymmetry beyond a 10-15% difference), we’ll simply target the weaker side by asking it to do more work (i.e. more sets/reps) while we also limit what the stronger side can do in order to prevent it from being overworked while we’re tying to “bring up” the weak side. This is how we “fix” issues like this without going out of our scope of practice by trying to play the “corrective therapy” game, which isn’t for the personal trainer to play. 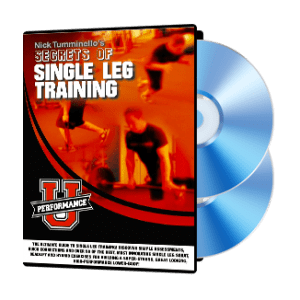 – The single leg training applications we’ll use include pulling weight sleds and heavy tires, which is a very knee friendly way to strengthen the lower-body in a locomotive manner that we’ve also found can really help runners to build legs that won’t quit (especially for those big hills).

Plus, pulling heavy sleds and tires gives us the opportunity to give the runners’ lower body a strength stimulus which is completely opposite from that of running. In that, runners are predominantly asking their legs to produce low force actions for extended periods of time. Whereas using a heavy sled does the complete opposite: it asks their lower body to perform high force actions for a very short (but very intense) period of time. 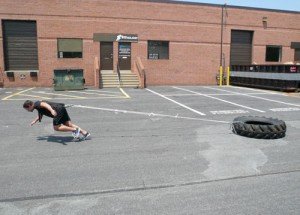 Also, make no mistake: dragging a weighted sled or a heavy tire is absolutely unilateral (oriented) lower body strength training. Sure you are not just standing on one leg, but one leg – the front leg – is always dominant in the action. The cool thing is, unlike when standing on one leg, the dominant leg changes each time you step when performing a weighted sled exercise, which makes the training demand unique to other modalities.

– The goal of our strength training for running programs is to help runners build and maintain strength without putting on unwanted muscle mass because a few extra pounds of muscle requires lots of energy, which could hinder their running performance. This goes back to what I said in the beginning about the goal of the runner’s strength workout program: It’s not to become a bigger and badder weightlifter, but to simply use weight training as a tool to aid in improving running performance and durability.

– Put simply, because our weight-room goal is a hybrid of maintaining current levels of muscle mass while also improving strength (i.e. force production) – the set and rep protocols we utilize with strength training for runners is a mix of hypertrophy oriented and strength oriented schemes:

– We’ll often combine these two (above) rep schemes (on the same exercise) by using pyramids, which (after a few warm-up sets) may look like this:

– The set and rep schemes above are applied to both lower-body and upper-body strength training exercises. That said, we’ll go for a bit more volume on the upper-body exercises since the upper-body is not getting nearly as much work during the athletes’ actual running training program.

Again, our goal with the upper-body strength training for runners is to help them to maintain their current level of muscle mass and (hopefully) improve their strength without gaining any additional muscle mass – unless they want to – which could interfere with their running performance.

– Like the upper-body exercise applications, the core training exercise applications we utilize in our workouts for runners are the same as they would be for any other athlete. Put simply, there are no special exercises (lower body, upper body or core) for runners; there are just exercises. That said, there are some (knee-oriented) exercises (like squats and lunges) that we don’t feel need to be emphasized in a comprehensive running strength training program for the rationale I’ve provided above. On the flipside, there are certain (hip oriented) exercises (like deadlifts, hip thrusts, anterior lunges, etc.) that we feel should be emphasized when designing strength training programs for runners for the reasons I’ve also provided above.

The Performance U approach when designing strength training workouts for runners is to:

Running: We don’t Hate and We don’t Dictate – We Help!

Before I wrap up this post I want to address that although running (for distances)  is not something we recommend (as a form of general fitness training)  to clients and athletes in the field, court and combat sports; we do not discourage people who enjoy running from doing so. In that, if someone has found a sport or a form of exercise (e.g., running) that brings them happiness and provides them with what they feel is a better sense of well-being, we feel it would be downright arrogant of us as fitness professionals to attempt to begrudge them of doing something they enjoy,  regardless of how we (the personal trainer or strength coach) feels about running.

Our approach to training runners and running enthusiasts is to simply inform each individual about how running may help or hinder their current fitness goals, so both parties (the trainer and the client) are ensured that the running is being done for the right reasons (i.e.  for enjoyment, or as training for a running event),  not because the individual is misinformed (i.e. they think it’s the magic method to fat loss).

In other words,  we don’t act as dictators by trying to tell people how to run their lives and what sports they should or shouldn’t be participating in.  Instead,  we act as personal trainers by – along with giving them  motivation – empowering people with the guidance and information to make more informed decisions as to how to run their own lives and achieve the fitness goals they have, not that us (the fitness trainer) think they should have.

Finally,  once we’ve informed someone on the information we feel they need to know in order to make an informed decision, we’ll coordinate with them to find the least amount of running they’re willing to do throughout the week without taking away from their personal enjoyment or interfering with any running specific training goals they may have. We do this to minimize the risk of a potential running related injury.