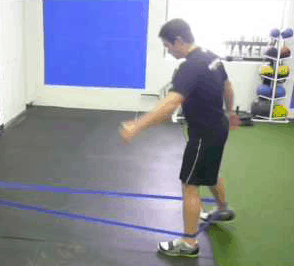 Glute training is hot topic! Everyone is looking for effective ways to fire up the glutes. Well, Monster Walks are a great glute exercise I’ve been using for years with the clients and athletes I’ve trained. And, I think it’s one of the best (unconventional) glute exercises you’re probably not doing. I’m hoping to change that by highlighting Monster Walks in this post and showing you how to perform both versions of them.

How to do Monster Walks

There are two versions of the band monster walk: A partner version and a solo version.

In this first video, I provide a detailed tutorial of how to perform monster walks, and also demonstrate how to perform the partner version of this glute exercise.

(Note: The quality of this video isn’t the best, as we had some technical difficulties with the camera. However, it still does the job.)

As you could see in the above video, the monster walk glute exercise is performed by putting the band around the backs of your ankles. You walk backwards, taking big steps, while keeping a slight bend in your knees, allowing your glutes to do most of the work. When you’re walking forward, which is the eccentric part of the exercise, keep the same form as you did while walking forward by avoiding excessive pelvic rotation.

For the solo version of the exercise, secure a band to the bottom of a squat rack, or any other support structure that won’t move. This video (from back in my old gym in Baltimore) demonstrates what both the partner version and solo version of band monster walk look like in real-time.

Teaching at the NSCA Southwest Regional Conference on January 27-28, 2017 in Sacramento, CA.

Co-Teaching The Brolando Experience – A 2-Day Workshop with Alan Aragon on February 4-5, 2017 in Orlando, FL.

Teaching at the Professional Fitness Systems Convention on March 24-26, 2017 in Cyprus, Nicosia.

Teaching a PreCon and conference class at the Annual CPTN Conference on June 2-3, 2017 in Toronto, ON, Canada.

Teaching at the AFPT Fitness Convention on September 1-3, 2017 in Oslo, Norway.

Teaching at the NSCA Mid-Atlantic Regional Conference on December 1-2, 2017 in Aston, PA.