The Corrective Exercise Trap: Responses to the Top 3 Questions About the Research

The Corrective Exercise Trap article, which I had the honor of coauthoring with Jason Silvernail and Ben Cormack, is now open access for everyone to read HERE. The article was originally published in the March 2017, Volume 4 – Issue 1 of the NSCA Personal Training Quarterly (PTQ) journal, which is only available to NSCA members. 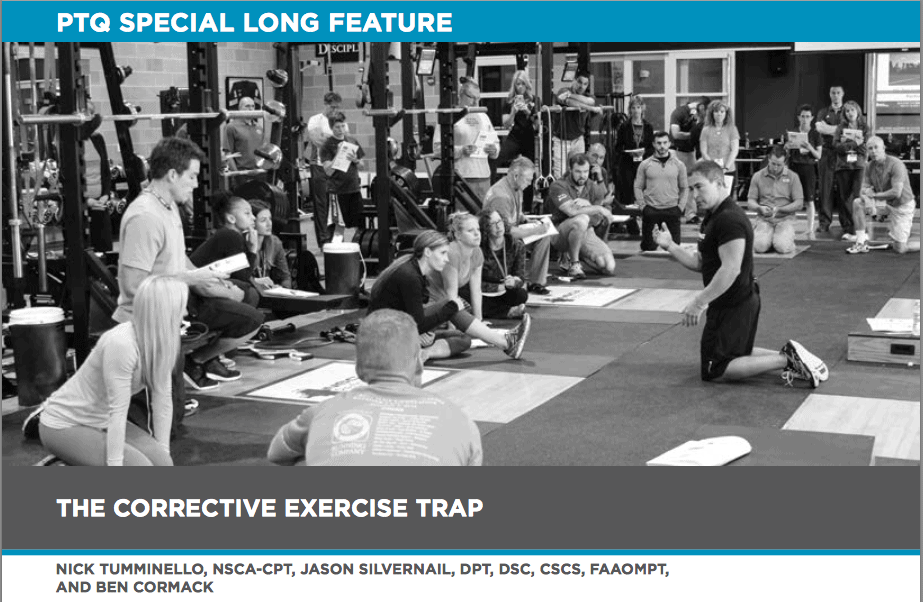 I also invite you to check out the blog post from Paul Ingraham about our article HERE on PainScience.com, which is a website that I think is one of the absolute best resources for science-based information on pain and rehabilitation.

In this post I’m sharing one of two sections of our Corrective Exercise Trap article that was edited out of the currently published version in order to keep the article from being too lengthly.

In order to provide clarity, the following provides Responses to 3 Common Questions About the Research the fitness professional may have in regards to the research and points discussed Section 2: Does Corrective Exercise Work? of the currently published version of the Corrective Exercise Trap  article, which you can read HERE.

1. What If a Professional Uses a Corrective Exercise Approach and Likes It?

What about those professionals using a corrective exercise approach who have happy and successful clients? First of all, the basic science is fairly clear: most any approach to exercise will demonstrate gains and improvements to beginners or those “naïve” to the methods. In fact, that’s the basic idea behind periodization. Second, clients who go from no regular exercise to a new exercise program that is consistent over time will experience gains and improvements in their fitness not necessarily related to the specifics of the program but just as a consequence of doing “any” training on a regular basis. They were just getting more exercise than before. The evidence points this way – no one denies people are getting better with exercise – but many have underestimated the power of well-tolerated regular exercise in a big picture sense while focusing too much on tiny details that the research is showing might not be clearly and predictably relevant.

Third, corrective exercise approaches might provide a useful framework for exercise prescription for some trainers or it might reflect a strong desire by the client to be evaluated according to a specific program. There’s nothing wrong with this approach as long as professionals don’t make claims for injury prevention or athletic performance that the scientific evidence doesn’t support. Using corrective programs as a start point or template would be perfectly defensible if the trainer acknowledges the problems with identifying “dysfunctions” and sticks to the science when it comes to claims of prediction and performance. If a professional is reading this article and they use a corrective exercise approach as the base of their programming for clients and athletes, they certainly don’t need to abandon it. However, they might need to check themselves to ensure they aren’t speaking beyond what the preponderance of scientific evidence can support.

2. Does this Mean that Biomechanics and Movement Quality Don’t Matter?

Many people respond to hearing the data on corrective approaches with the question, “Is this saying that exercise form and movement quality don’t matter?” That is not the correct conclusion to draw here. The authors are only asking professionals to consider the standard on which they judge those important concepts. Is the standard one of the foundational science of biomechanics and kinesiology of movement or is the standard a formalized proprietary evaluation system from a commercial program?

Many corrective exercise proponents would like to blur the lines here and substitute their opinion and their specific recipe of an approach for exercise science. They would like you to take a black and white view of this issue – they often propose a false choice of “exercise form and movement don’t matter at all” or “use this particular system.” The authors encourage trainers and coaches to reject this false choice and keep the emphasis on the central issue – the standard on which movement and form are judged. The authors argue that the standard is a commonly-understood base of biomechanics and kinesiology, and not a commercial evaluation checklist sold in a seminar. This basic science approach provides a range of safe and effective movement/form for each exercise that can be adjusted to meet the client’s needs and individual situation. The authors feel that the general exercise science approach to good personal training would produce a program that would be widely recognized as of good quality in any gym or studio around the world – and would not require a professional to be a devotee of a particular system or have attended certain commercial seminars to recognize it as such.

In order to have a training world that’s not continually clouded by commercialized corrective exercise ideas divorced from a solid science base, the positive experiences people are having with corrective exercise practices need to be captured in a way that’s not centered on a particular commercial program. Fitness professionals, as well as clients and athletes, need simple and reasonable ways of speaking about these experiences and about finding a safe, effective and individualized training direction. This direction should rely on established general exercise science and produce a program that would be widely recognized as of good quality around the world without requiring someone buy into a specific commercial approach.

3. What about Using Corrective Exercise as a Higher Level of Training Service?

In Oslo, Norway teaching at the AFPT Fitness Convention on September 1-3, 2017

In Chicago, IL teaching at the Elite Fitness and Performance Summit on September 14-16, 2017

In Dubai teaching a one-day Personal Training Seminar on September 30, 2017.