The Most Dangerous Resistance Band Exercises 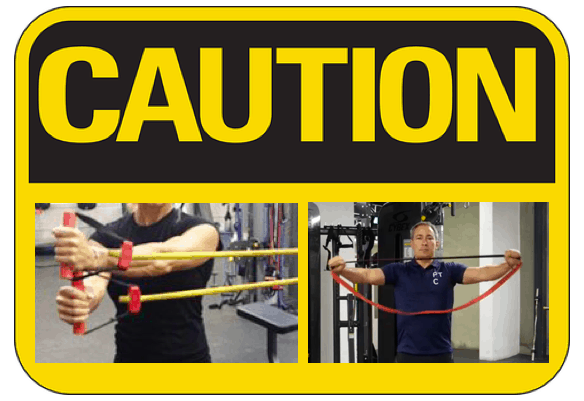 There are a couple pieces of affordable, versatile and portable equipment that I recommend you always have in your gym bag: resistance bands with handles, a hip loop band and NT Loops.

These resistance bands are not only easy to pack when you’re traveling but allow you to group exercises requiring immobile equipment (e.g., squat rack or machine) with exercises using the more mobile bands. Band exercises can be incorporated in a paired set or tri-set while you remain at the immobile equipment, keeping you from having to walk all over the gym, saving you valuable time, and hopefully avoiding losing your equipment to another member mid-set.

As with any other fitness equipment, while there are many benefits, resistance bands can be hazardous when not used properly. Unfortunately, many exercisers, trainers and physiotherapists – many of whom are experienced – commonly use resistance bands in a reckless and dangerous way without realizing it.

In an effort to bring more awareness to the safe and effective use of resistance bands, I will first address the most common (and avoidable) resistance band injuries, followed by guidelines for resistance band usage. I’ll then highlight the riskiest resistance band exercises commonly used by experienced lifters and trainers alike, and offer safer, more effective alternatives.

The Most Common Resistance Bands Injuries

The two main dangers involved with using latex resistance bands (i.e., bands with handles and strength bands) are breaking of the band or accidentally letting go of an end while under tension (from inside the hand or underneath the feet), resulting in the band snapping back and striking the user. Resistance bands pose a unique hazard because they can strike you in the face, causing serious (possibly blinding) eye damage.

A Google search of the terms “resistance band” or “exercise band” and “eye injury,” results in hospital data providing a long list of eye injury incidents caused by resistance bands (1) along with numerous legal firms, safety commissions and eye surgeons talking about cases of resistance bands causing serious face and eye injuries. Despite the overwhelming number of documented incidents and convincing data, this reality is completely overlooked by the majority of experienced lifters, trainers and physiotherapists. Resistance band safety is not something often taught in fitness education, therefore is not considered by most when using resistance bands for exercise. I know I sure as heck didn’t consider the safety concerns of resistance bands for many of my years as a trainer and educator. Talk about a massive oversight!

When using resistance bands, minimizing training-related injury risk isn’t just about good exercise technique and avoiding overdoing it; it’s also about being aware of these basic safety guidelines to ensure your band workout doesn’t result in a preventable, accidental injury.

Here is a list of safety guidelines when training with resistance bands:

Use the following guidelines for proper storage and care of resistance bands in order to improve safety by reducing the chance of the bands breaking (taken from Culture of Safety – an organization that provides safety resources for community organizations):

The Most Dangerous Resistance Band Exercises

This is a glaring example of how education about using resistance bands properly and safely hasn’t kept up with the popularity of some resistance band exercises.

Band face pull proponents seem to only consider the potential training benefits the exercise has on the shoulder complex. But users must also understand the equipment being used. Band face pulls are a very dangerous exercise considering the massive risk of suffering a potentially blinding eye injury if the band snaps…and bands snap all the time.

The risk of a band ripping when doing face pulls is further increased when you consider that the way many exercisers and gyms store their bands violates the storage and maintenance guidelines provided above. In addition, many keep their bands for too long – even with obvious signs of damage – and store them in their car year-round, which exposes their bands to direct sunlight, heat sources (in the summer) and cold environments in the winter.

Many gyms are also negligent in proper resistance band storage and maintenance. In order to save on overhead costs, many gyms do not keep their heat on in the winter during non-business hours and/or they store bands directly under a heater or by the window, and as a result, weakening the bands. Without knowing better, the gym’s staff may be using soap or other cleaner on the bands. Compounded by improper storage and maintenance, consider the numerous members who repeatedly misuse the bands, furthering the risk of malfunction.

Another liability is common partner resistance band exercises where two people are each holding an end or a handle of a resistance band; for example, partner band rows, or any exercise where both people are facing each other while holding opposite ends of the band.

All it takes is one person to accidently let go of the band and the person on the other side can be seriously injured. The severity is increased when the band has a hard, plastic handle that becomes a projectile…a projectile that could hit someone in the face!

With this reality in mind, only perform this type of partner band exercise if each person has the band looped around their wrists (see image). It’s far more secure than giving it the old GI Joe-Kung Fu grip.

Lastly, it’s also common to place a band around someone’s waist and have them do resisted walking or running, forward or backward, while the trainer or training partner holds the other end of the band. There’s nothing wrong with these exercises. However, as stated above in the band safety guidelines, it’s important that when performing these exercises, to never lean on the band in such a way that it is supporting someone’s entire bodyweight. Injuries can occur where the user falls because the resistance band breaks while leaning their weight onto the band.

In this NT Loop promo video, notice how, in the partner exercise at the 14 second mark, I’m doing waist-resisted skipping while Romina does waist-resisted kettlebell RDLs; both of us are working against the band while keeping weight on our own two feet. Not only are the NT Loops more comfortable and stable around your body, they’re more durable, as they won’t break under normal exercise usage as traditional latex strength bands will.

The fact that so many mainstream fitness publications, as well as otherwise intelligent and experienced physios and trainers (myself included in the past) frequently direct their readers and clients to use exercises like band face pulls and risky partner exercises, shows that exercise band safety is not an issue that is taken into consideration nearly enough. This highlights the need for more awareness of safe exercise band usage that can limit many easily avoidable exercise injuries and accidents. We all need to think about this when using fitness equipment – not only about proper form and what training benefits an exercise may offer.

Regardless of what types of resistance bands you’re using – or any other fitness equipment for that matter – it’s important you have a great workout, but it’s just as important your workouts are performed using the equipment in a smart, safe manner.