The following is a guest post by Dr.Spencer Nadolsky.

While personal trainers are not expected to know pharmacology, there are some common prescription drugs that they should be aware about. Many times, the physician won’t know the patient’s fitness goals and will prescribe medicines that may be counterproductive. For this reason, I thought I would put together a list of some of the most frequently prescribed medicines that a personal trainer may want to know. Many of these medicines are listed due to their weight gain side effects, but some of these should be known for their other side effects that can hinder progress in the gym.

DISCLAIMER: At NO point is it appropriate to stop any of the client’s medicines. All you can do is refer back to the physician and ask if it is truly needed or if an alternative is possible.

1. Paroxetine (Paxil) and other antidepressants

Antidepressants are high on the most commonly prescribed list of medicines. As a personal trainer, you should know that many of them CAN hinder fat loss (Paxil is the biggest culprit) and you may not have even known your client was taking one. (1)

Beta blockers are commonly prescribed for high blood pressure or for folks after a heart attack. They work by blocking some of your adrenalin receptors (the beta receptors, hence beta blockers). For this reason, they not only cause weight gain, but can also cause a great deal of fatigue and exercise intolerance (they won’t be able to get their heart rate up!).(2)

The depo shot is a very convenient form of birth control, but it comes at a price of weight gain compared to other forms (pills, IUD, patch, implant, condoms). Women can expect to see an additional 5-10 pounds average when using the depo shot (I have seen up to 20 pounds in 3 months!).(3)

Have chronic allergies and take antihistamines like daily? You may be causing weight gain or at least not helping weight loss. These drugs are VERY common and are even over the counter so they may go unnoticed as a fat loss barrier. (4)

These are often times necessary for those with uncontrolled asthma, but just understand that they can often times cause weight gain. (5)

The use of statins in different populations is widely debated, but one thing is for sure, they CAN cause muscle pains and aches. As a trainer it would be good to know and evaluate the level or soreness after workouts. (6)

Prescribed for common urinary tract infections in women (and men too once in awhile), flouroquinolones can weaken tendons temporarily. I would be very careful with the plyometics and heavy loads in clients who have recently been on one of these. In fact I have personally seen multiple achilles tendon ruptures after a course of these antibiotics. (7)

I included both the sulfonylureas AND insulin together because they both can cause weight gain and also hypoglycemia. It will be important to know when your client is on one of these medicines because you will want to be aware of the risks of hypoglycemia (and of course the weight gain) and also to know the signs. (8)

I added NSAIDs (Non-Steroidal Anti-Inflammatory Drugs) because they are very commonly used among lifters for aches and pains. Many people think they are very safe drugs, but when used chronically they can cause many side effects including gastrointestinal bleeding, high blood pressure, and kidney injuries. They are also implicated in a higher risk of cardiovascular events (heart attacks). Note that they are still very useful in many situations, but many clients may be popping them like candy without knowing their possible side effects. (9)

This is both a mood stabilizer (for those with bipolar disorder) and an anti-convulsant (anti-seizure). Second to lithium (which isn’t prescribed as often anymore), this mood stabilizer will cause significant weight gain. There may not be any other option for mood stabilization but this is a drug that trainers should be aware of if their client is not losing weight. (10) 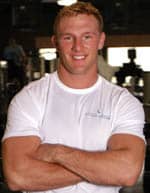 Dr. Spencer Nadolsky graduated from the University of North Carolina – Chapel Hill with a BA in Exercise Physiology and then went on to get his medical degree from the Virginia College of Osteopathic Medicine. He is currently a family medicine resident physician working in Newport News, VA. In college he wrestled heavyweight for the Tar Heels and was ranked as high as 3rd in the nation at one point while also garnering Academic All-American status.

Read More »
PrevPreviousBreathing Exercise B.S., Foam Rolling the Shoulders & 5 MMA Exercises
NextSquat like an Adult, Not like a Baby!Next