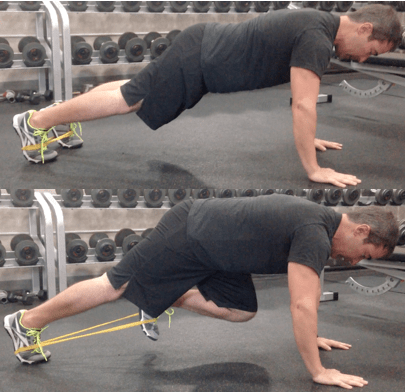 The mini-band loops are a favorite piece of equipment in the Performance U training system because they’re extremely cost-effective, travel-friendly and offer a variety of unique exercise applications. Especially when it comes to training the hip musculature. 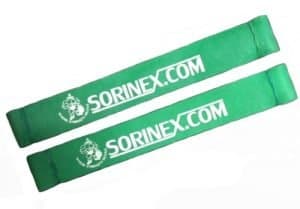 The following are the Top 3 Mini-Band Exercises used in the Performance U training approach.

We developed this exercise to create a double-whammy on the hips, by hitting both the hip flexors and the hip extensors in one comprehensive exercise. Not to mention, the additional demand on the muscles of the torso and hamstrings.

Whereas the two mini-hand exercise applications provided above focus on hip flexion and hip extension, the mini-band box step focuses mostly on hip abduction and a bit on hip external rotation (to resist valgus collapse at the knee from the force of the mini-band).

In the performance U training approach, each of the 3 applications above are sometimes used as stand-alone exercises, and other times used together, circuit-style, as a protocol we originally called the “mini-band hip series” until several personal training clients remanned it the “mini-band butt blaster circuit.”

Whichever name you prefer to use to label this protocol, we’ve found that these 3 mini-band exercises provide a very unique training stimulus for the hip musculature, that when combined with foundational strength training exercise applications (like squat, deadlift and lunge variations), can serve to make lower-body workouts more comprehensive, and increase the strength band development of the glutes and hips.

Here’s how 1-set of the mini-band butt blaster protocol is done:

Interview on the Alpha Man Podcast

How to Lose Fat Without Losing Muscle on LiveStrong.com

Better than body building : Strength training gets a makeover on Fox News

In Washington DC on July 31 – August 3, 2014 teaching at the DCAC Fitness Convention

In Montreal, CAN on August 16th, 2014 teaching at MOVE with Brad Schoenfeld