When we want to build strength in the mid-back muscles (lower traps, mid traps, rhomboids), which are commonly weak and under developed. And, hit the lats, rear-delts and biceps as well – We grab a suspension trainer and go to town on the BACK BLASTER Workout!

The Triple Threat Back Blaster protocol is basically a giant set of three pulling variations, which train the mid-back muscles (and lats) from the center out. Here’s the breakdown of why we designed this protocol the way we did;

– We begin with the Y Pull exercise because it’s the most difficult of the three movements involved in the triple threat protocol. And, it’s the easiest to perform wrong. Since it’s the weakest of the three pulling movements involved in this protocol, we have figure competitor Deanna Avery  standing with high (minimal) body angle. We have also have Deanna keep her arms open in the shape of a “Y” (or V) to better go along with the line of action of the low traps.

– The second pulling movement is the Wide Elbow suspension Row, which we perform to hit the mid-traps, Rhomboids and rear-delts.  The elbows are kept at a 90-degree angle to minimize biceps recruitment, which could take work away from the mid-backs muscles (we don’t want that).  Since we are using larger muscle than on the Y exercise, we can lengthen the lever arm (to add load) by moving the feet in (toward the anchor point of the suspension trainer) about 1 foot.

– The third and final movement, the underhand grip suspension row, is the easiest and strongest movement because you’re now able to bring in your lats and biceps into the game. That’s why we have you walk your feet in another 1 foot (or so) closer to the anchor points, which increases the weight-load further by lengthening the lever arm.

–       You can try reversing the order of this protocol, but we’ve found it doesn’t work as well because the muscles that usually need the most attention, like the mid trap and Rhomboids, end up getting less overall work due because you’re fatigued from the rows. There are lots of great rowing exercises with machines, dumbbells and barbells, etc., that hit the lats and biceps, but the training options are more limited for the mid-back muscles. Another reason why they’re prioritized first in this protocol.

–       There’s sort of an “accommodating resistance” thing that happens when doing all of these pulling exercises using the suspension trainer. In that, as you pull yourself up toward the handles, your body angle is decreasing, which shortens the lever arm. This makes each pull less difficult at the top, when you’re muscles are fully contracted. This fits well with our natural strength curves because muscles tend to be strongest in their mid range and less strong in their end (fully lengthen or fully contracted) ranges.

I’m  a fan of suspension exercises (some more than others), but I don;t see a reason to exclusively use suspension training exercises when they’re so many proven free weight exercise options available as well.

Check out my article – Build a Killer Body with Free Weight & Suspension Straps – in the March/April 2012 issue of REPS! magazine (in stores now) on pg.86-100. 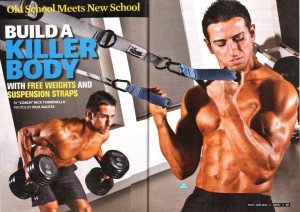 Read More »
PrevPrevious7 LESSONS from BRUCE LEE (that’ll make YOU a better trainer)
Next8 Abilities of an ATHLETIC BADASS (that have nothing to do with the Bench Press, Squat or Deadlift)Next