Turkish Get Up Modification for Beginners & Low Back Issues 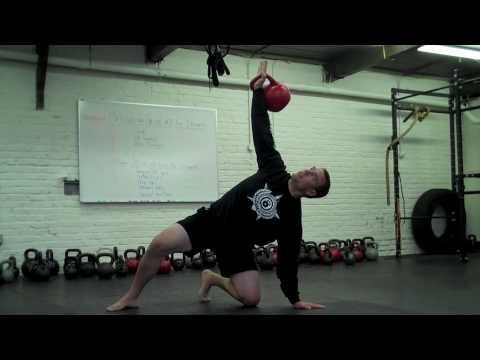 The Turkish Get Up (TGU) is a fantastic Core exercise because it not only demands a high level of body control, it also requires you to use all of the muscles of your torso (abs, shoulder, hips) together. 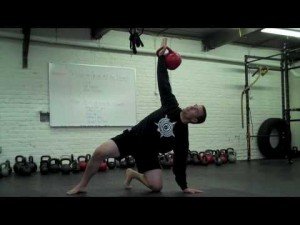 Dr.Carl DeRosa does a great job a quickly explaining some of the benefits of the Turkish Get Up exercise in this video below.

The Performance U Approach to TGUs

Although we feel the TGU is an effective, high-value training option, we don’t feel it’s a “must-do” exercise that has magical and mysterious powers, as it often gets touted in a few fitness cults. We also don’t get caught up with these silly arguments about the only “right way” to do the TGU based on this or that particular school of thought, as we hold no allegiance or emotional attachment to anyone (i.e. a particular fitness cult) but to the people who pay us to help them to find the right exercise approach for them individually.

With that said, the video below displays a simple modification we’ve used to help several personal training clients who are just beginning to use the TGU (that’s what I mean when i say “beginners”). We’ve also found this modification helpful for some folks with low back issues to safely perform Turkish Get Up while working around their limitation.

Additional Personal Training Notes on the Turkish Get Up:

– The TGU is NOT a “Kettlebell exercise”, it’s just an “exercise”… PERIOD! In that, you can use any type of external load to increase the training demand.

In fact, mixing up the equipment you hold to perform the TGU (Dumbbell, Kettlebell, Sandbag, Barbell) can be an effective ways to add variety to your TGU training. But contrary to popular misconception, no one piece of equipment (i.e. KBs) has any magical or mysterious powers over the other.

– For reasons beyond the scope of this post, we don’t use the “stand up portion” of the TGU. Instead, we prefer to stop and reverse the motion from either the seated (upright torso position) or from the 1/2 kneeling position.

The Surprising History of the Kettlebell & Turkish Get Up

While we’re on the subject of the TGU exercise and KBs, I thought it would be fun to close things out with some interesting history lessons on these fitness fads.

Here’s Richard Sorin, and exercise historian and owner of Sorinex, on how the Greeks (actually) applied the Kettlebell in their fitness training.

History of the Turkish Get Up

According to Terry Todd, PhD, an exercise historian and cofounder of the H.J. Lutcher Stark Center for Physical Culture and Sports at the University of Texas, there’s probably nothing Turkish about it – ” The Turkish Get Up exercise likely began in Germany, Austria, or France as a stunt performed by entertainment balancing troupes. Instead of using a dumbbell, stuntmen would use another performer as weight.”

In other words, as often as personal trainers like to make fun of things like standing on swiss balls as “circus acts” – the TGU REALLY was origainlly designed as circus act (i.e. stunt)!