Just about every personal trainer and exercise enthusiast uses a variety of rubber resistance bands (Tubes, Loops, Superbands, etc.) in their regular training practice because resistance bands are a versatile and effective training tool that anyone can use anywhere to perform a wide variety of exercise options.

However, regardless of the type of band you’re using or the exercise you’re using it for – Many personal trainers and exercise enthusiasts fail to realize that, unlike when using free weights, using heavier bands may not be the best way to increase the workout challenge (i.e. create progressive overload) on any and all band exercises because of the key principle displayed in this chart below. 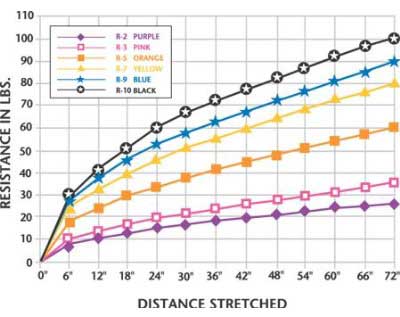 To us, this reality means that using very thick/ heavy duty bands may not be the best option when trying to increase the work load (i.e. increase the exercise challenge) when using rubber resistance tools, which is why Heavy/Thick bands are not utilized in the Performance U training approach to create resistance UNLESS it’s for assisting in Chin Ups and Pull Ups.

Instead of using the extra thick/heavy bands, our approach to increasing the load when using resistance bands (of any kind: Tubes, Loops, Superbands, etc.) is to use multiple (2 or 3) medium or light resistance bands.

We’ve found that using two medium bands (instead of one super heavy band) allows us to create the extra load (i.e. add resistance) and also offers us the gradual accommodating resistance we want in the exercise without the undesirable (drastically increasing) force curve we don’t want from the thicker bands.

If our goal is to really minimize the force curve when using bands (i.e. keep the resistance as consistent as possible) to give us a cable column-like feel, we may use use three lighter resistance bands.

When using Superbands around a barbell or when using rubber resistance Loops around your ankles, it’s obvious that you can use two or three light/medium bands without issue. However, when using Resistance Tubes with Handles, it’s unrealistic to hold multiple handles in each hand. Enter the JC Predator Band!

The JC Predator Band is a Performance U favorite because it not only allows you to adjust to using single or multiple bands, it also fits with our thought process of using more smaller/medium bands to add load, instead of just going to a super thicker band with a more drastic (and awkward) force curve.